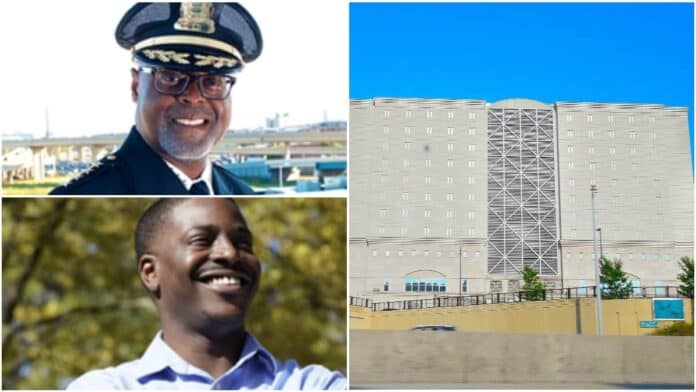 The Sheriff’s spokesman confirmed to Wisconsin Right Now that “we are currently operating at 177 out of 261 officer positions filled, a number that’s decreased at a fast pace over the preceding months.”

The staffing crunch is even more severe due to people calling in sick, sources told us. The problems in the jail come at a time of skyrocketing crime in Milwaukee, and they’re causing Milwaukee police to have to hold people for days in district stations, when they would normally be held for hours, a source told Wisconsin Right Now. We also heard that the issues are coming on the heels of a gradual reduction in budgeted positions over the years in the Milwaukee County Sheriff’s Office, which has added up over time, as defund the police rhetoric continues throughout the country.

James Burnett, the spokesman for Milwaukee County Sheriff Earnell Lucas, attributed the staffing problems to low pay for correctional officers, in part. “The Sheriff’s Office has no power over compensation. The decision-making authority here rests solely in the hands of the County Board and County Executive, but we’re working tirelessly to encourage fair pay for our officers,” he said, calling the current compensation for the county’s correctional officers “unacceptable low pay.” He acknowledged that the pace of bookings has slowed, and he said, “As more staff depart the agency, more mandatory overtime becomes inevitable, and workplace conditions deteriorate no matter how hard we work.”

We started hearing about the staffing problems in the jail when we wrote a story about the Milwaukee County Sheriff’s Department renaming inmates “person in our care” and “occupant” and stripping the word correctional from correctional officers’ titles. One source contacted us and stated, “Instead of worrying what they are calling their inmates, maybe the MCSO should worry about their blue flu.” People are both resigning and calling in sick, compounding the issue, that source said.

Burnett debunked reports that around 20 officers resigned last week. Three did. All went to the Racine County Jail, where they could make more per hour. “With that said, it is entirely possible that up to 20 officers are taking a hard look at other positions, because their outstanding service is not being compensated fairly in their current roles. We have communicated proactively to our staff regarding our efforts at increasing compensation, and we will continue to do so, at an individual level, to try and retain as many of our personnel as possible,” Burnett said. We asked him how many officers have resigned and called in sick since the beginning of the year, and he said he will get us those numbers (in fairness, he only had an hour or so to do so before this story went to publication. We will add those numbers into this story when received.)

We reached out to County Board Chairwoman Marcelia Nicholson and County Executive David Crowley and asked what they are doing about the shortages and whether they support increasing CO pay and the Sheriff’s Department’s budget. We also reached out to the Milwaukee County Deputy Sheriff’s Association. We haven’t heard back yet.

Another source told us that the jail is sometimes staffed at around half the minimum, and deputies are being pulled from other areas to assist with jail operations. The source said the correctional officers are leaving for higher pay and better treatment by supervisors. “1st shift gets held over for 2nd and 2nd for 3rd and so on -almost no off days,” the second source said, adding that COs qualify for the Family Medical Leave Act.

“It’s pretty much a doctors excuse to get out of anything it can be used for long term periods and or intermittently as needed by the individual who has it and due to it being medically related supervisors have cannot ask questions.”

The FMLA website says, “The FMLA entitles eligible employees of covered employers to take unpaid, job-protected leave for specified family and medical reasons with continuation of group health insurance coverage under the same terms and conditions as if the employee had not taken leave.”

We asked Burnett about all of this.

“MCSO has been working tirelessly to address these longstanding challenges,” he told us. “Senior agency leadership coordinates closely with our officers’ association to address concerns related to working conditions. In recent months, as staffing levels have decreased, we have made significant changes to daily operations in consultation with our officers. This includes creating additional incentives for voluntary overtime, including a better guarantee of off-time. We have also, at the request of our officers, established a fourth, split shift that runs concurrently with 1st and 2nd Shift and, due to its structuring, helps limit overtime.”

However, he said longer term fixes are needed.

“With that said, these are just Band-Aid fixes for a more significant problem: unacceptably low pay that drives exceptionally talented officers to seek better-compensated positions in the surrounding area,” Burnett said. “As more staff depart the agency, more mandatory overtime becomes inevitable, and workplace conditions deteriorate no matter how hard we work, and no matter how well we coordinate with the impacted officers. We are currently operating at 177 out of 261 officer positions filled, a number that’s decreased at a fast pace over the preceding months.”

Burnett said that starting pay for a correctional officer in Milwaukee County is $21 an hour, compared to $29 of higher in other jurisdictions.

“No doubt more of our personnel are eyeing significant raises in other agencies. It’s hard to fault them: while we operate the busiest and most demanding facility in the region, our starting officer pay is less than $21 an hour and, essentially, remains stagnant due to a lack of available County funds to provide step raises in the jail,” he said. “Other jurisdictions, working with much smaller occupant populations, are exploring (or have already implemented) officer salaries of $29 an hour and higher.”

He added, “Currently, MCSO is working with members of the County Board to introduce a compensation increase, ideally effective this October if entered and approved in the September County Board cycle, that would increase compensation to this much higher level. The Sheriff’s Office has no power over compensation. The decision-making authority here rests solely in the hands of the County Board and County Executive, but we’re working tirelessly to encourage fair pay for our officers.”

Burnett added: “Even with staffing levels this low, we are continuing to book upwards of 50 individuals per day, albeit at a slower pace than before this emergency. We recognize the impact of this situation on our partner agencies throughout Milwaukee County and, frankly, on our own Police Services Bureau. We are supplementing jail staffing with deputy sheriffs on voluntary overtime – to the extent feasible, given the staffing demands that exist on our deputies at the airport, in the courts, and in the field.”