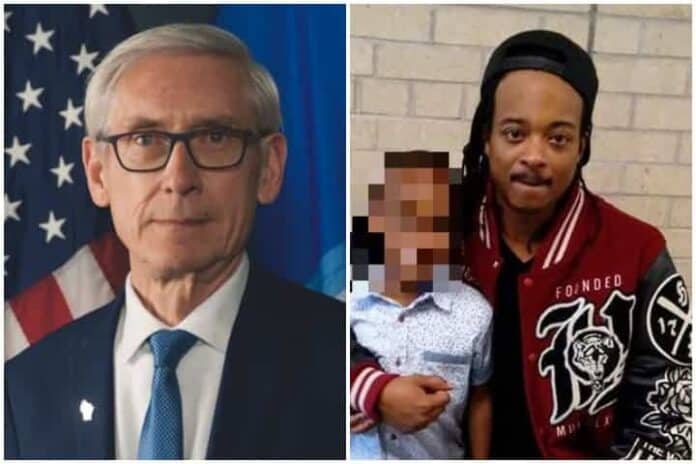 Gov. Tony Evers released an appalling statement on Aug. 23, 2021, one year after a police officer shot Jacob Blake in Kenosha, Wisconsin, in self-defense. Apparently, Evers has learned nothing from the inciting, outrageous statement he released right after the shooting first occurred, which arguably incited riots and arson fires, part of which was:

“While we do not have all of the details yet, what we know for certain is that he is not the first Black man or person to have been shot or injured or mercilessly killed at the hands of individuals in law enforcement in our state or our country.”

Evers never took responsibility for releasing the outrageous statement. Instead, he doubled down on the one-year anniversary, issuing a despicable press release that is arguably even worse because the District Attorney has now exonerated the police officer.

Let’s take his most recent statement line by line.

The life of Police Officer Rusten Sheskey – who was mercilessly and unfairly slammed by the media, left, Evers, Lt. Gov. Mandela Barnes, and others – also was forever changed. He was ultimately exonerated by the District Attorney, but not before a despicable rush to judgment. The lives of all Kenosha law enforcement officers were forever changed by the unfair and negative narratives against police fomented by Evers, Barnes, the media, and others.

The lives of Kenosha business owners were also forever changed, especially those whose livelihoods burned to the ground in arson fires that might have been prevented if Evers had gotten the National Guard to Kenosha in a more timely fashion.

Evers: “We also know the families and friends of Joseph Rosenbaum and Anthony Huber are undoubtedly grieving and mourning the loss of these young men this week.”

Rosenbaum was a registered sex offender who was out on bond for a domestic abuse battery accusation and was caught on video acting aggressively earlier that night. Huber was a felon convicted in a strangulation case who was recently accused of domestic abuse. Rosenbaum was also caught on video using a racial slur earlier that night. “Shoot me (n word),” he says in a video.

The criminal complaint alleges that Rosenbaum was trailing teenager Kyle Rittenhouse, threw a plastic bag at him, initially tried to engage him, advanced toward him, and was trying to grab Rittenhouse’s gun when he was shot. It says that Rittenhouse, 17, was trying to evade Rosenbaum. The New York Times says a gunshot fired by an unknown person was heard right before Rittenhouse fired. Others were also chasing Rittenhouse at the time, video shows.

The criminal complaint against Rittenhouse says Huber was also trying to grab Rittenhouse’s gun and his skateboard made physical contact with Rittenhouse right before Rittenhouse shot him.

Rittenhouse is innocent until proven guilty in a court of law, and has not yet stood trial. It is outrageously inappropriate for the governor to weigh in before he has; it could arguably taint the jury pool.

Evers: “While we are grateful Jacob survived his injuries, we also know Jacob, his kids, and his family have and will face challenges they never imagined having to endure.”

Evers doesn’t mention the role Blake played in what happened to him, including the fact he was wanted on a felony warrant involving domestic violence and a sexual assault charge. He also doesn’t mention that the police officer was found – by a Democratic DA and retired black police chief – to have acted in justified self-defense.

According to the DA’s report, here are some other facts that Evers leaves out:

Evers: “Kathy and I are thinking of Jacob and his loved ones, as well as the families and friends of Joseph and Anthony today, and we ask Wisconsinites to join us in extending our prayers for peace and healing.”

This kind of incendiary, one-sided, and outrageous statement hardly leads to “peace and healing.” It’s too bad Kathy and Tony aren’t also “thinking” of Kenosha police officers and business owners today. Are they thinking about the woman who called police in the first place?

Evers: “This past year has been difficult, and especially for the Kenosha community as they have worked to come together to repair and rebuild. Wisconsin has taken important steps to increase transparency for use of force policies and incidents, limit the use of chokeholds, and require state-managed law enforcement agencies to update their use of force policies, but this is only the beginning. We must remain resolved in addressing the systemic racism and inequities Black Wisconsinites face every day and to continuing our work toward a just, equitable, and fair state.”

There is no evidence that race or “systemic racism” or “inequities” against black Wisconsinites played any role in the Blake shooting. Certainly, the DA and retired black police chief did not find such.

It’s also faulty logic to use a police shooting conducted in self-defense as a predicate for police reform statewide.

How about the mother of Jacob Blake’s children who had accused Blake of sexually assaulting her? Does she get a mention? Those charges were later dropped in a plea deal. 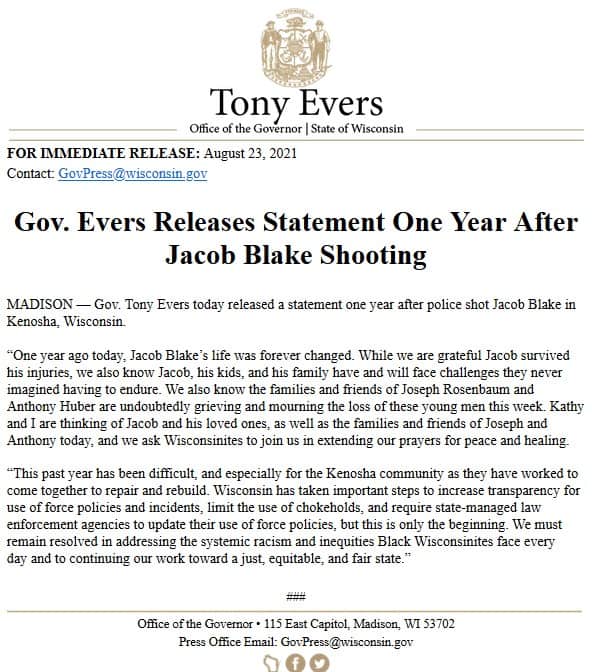