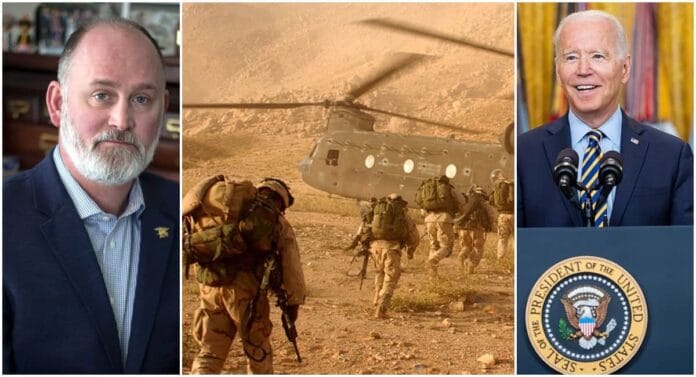 “For my brothers and sisters who served in Afghanistan, they did their duty, and they need to hold their head up high and walk with pride” – Derrick Van Orden

Derrick Van Orden, the Republican Congressional candidate who is running for Ron Kind’s soon-to-be-vacant seat, is slamming what he calls President Joe Biden’s “incompetence” in exiting Afghanistan, calling Biden’s approach a disaster and the “largest foreign policy debacle in the U.S. in my lifetime and that includes Vietnam.”

Van Orden called Biden’s botched exit from Afghanistan the “greatest example of incompetency we have seen in the executive branch certainly in my lifetime. If you tried to do this worse, you would be hard-pressed…There’s no way you can look at this from any angle and say this ship has a rudder.”

In 2020, Derrick Van Orden gave Democrat Kind the fight of his political career, losing by only 11,000 votes. Van Orden then announced a rematch, and Kind announced he is retiring. Republicans believe Van Orden is one of the candidates best poised nationally to pick up a Congressional seat.

We reached out to ask about his thoughts on Afghanistan because, as his biography says, Van Orden “retired as a Navy SEAL Senior Chief with 5 combat deployments and several others to troubled areas in the world.”

His combat deployments were to Bosnia Herzegovina and multiple combat tours to Afghanistan and Iraq. Additionally, he served in the Horn of Africa, Asia, Europe, and South and Central America. He starred in the motion picture Act of Valor.

The combat veteran and former NAVY Seal did not mince words. When we asked him what he wanted to make sure people knew, he spoke with deep emotion about the Americans who served in Afghanistan.

“This is what I want people to know,” Van Orden stressed in the interview with Wisconsin Right Now.

“For my brothers and sisters who served in Afghanistan, they did their duty, and they need to hold their head up high and walk with pride. I have seen some of the most beautiful expressions of the human condition possible: selflessness, sacrifice, courage, honor, bravery, unconditional love.

I saw those with my own eyes holding my friend’s hand as he died, holding a satellite phone with his wife crying because she knows she won’t see him again. He did that for his nation, and that’s honorable.”

He added, “There is an obelisk in downtown London, the inscription reads, ‘In memory of our glorious dead.’ If you think about these young men who jumped on hand grenades for their friends or jumped on top of somebody to protect them – that is glorious.”

Asked what he thought the ramifications of Biden’s botched Afghanistan exit would be for the country, he said, “Essentially right now, it’s Sept. 10, 2001; we don’t know.”

The troops need to have confidence in their leaders, he said. “President Biden has proven to be incompetent. After a 20-minute press conference, he was back at Camp David. He either doesn’t have the stamina or doesn’t understand the gravity.”

Fort McCoy is in Kind’s congressional district. Asked his opinion about the possibility of thousands of Afghan refugees coming to Fort McCoy, Van Orden said that he lived, worked and fought with the Afghan people and “we made them a promise.”

He said that Afghan refugees should be initially exfiltrated to a third country, where they can be “completely screened, quarantined for COVID, screened with all of the biometrics we’ve gathered…vetted.” He noted that would still “be an incomplete process” because the current state of the country makes it impossible to check people’s backgrounds with local authorities, which would normally be part of the process.

If even 1% of the refugees actually work for the Taliban or al-Qaeda, and “we fly them into Fort McCoy and drop them on the ground,” he questions what the government would do with them next. “Do you put them in the county jail or federal prison or re-energize Gitmo?” he asked. He believes the exfiltration of refugees has been “so poorly done.”

If it’s determined that refugees are among “the people who helped us,” he believes we should bring them to Fort McCoy because “we made them a… promise.” Many gave their lives and the ones who survived “have to go somewhere.” He just wants to make sure the refugees are “thoroughly screened,” and he questions how easy it will be to “absorb 30,000 people.”

He believes that people “don’t take the time to think about these things. They treat foreign policy like a 24-hour news cycle.” He believes it’s important to get more people in government who understand the realities on the ground in countries like Afghanistan because they lived them. He believes that will result in better and more nuanced policy decisions.

He pointed out that the raid to get Osama bin Laden was launched in Afghanistan and such a mission would be impossible if attempted today. He believes the administration “doesn’t have a basic understanding of how counter-terrorism works.”

Derrick Van Orden said he “loves the U.S. military. I refuse to pull any punches.”

According to Derrick Van Orden, under President Donald Trump’s approach, the United States found “stasis” in the country that it could have maintained. He believes that a streamlined approach with about 2,500 troops could have helped prevent the Taliban takeover we are seeing now.

He noted that the United States still has troops in Germany and other countries.

“I want to be really clear, I lived and worked and fought with the Afghans,” said Van Orden. “Many Afghans, we made them a promise. Our word as a nation has to be our bond. The way that the Biden administration has comported this exfiltration has made that exponentially more difficult to achieve.”

According to Van Orden, “I 100 percent guarantee that this wouldn’t have happened under President Trump.” He said that Trump’s plan for Afghanistan revolved around a “phased drawdown” that included moving out equipment, extricating people, but leaving a presence in Iraq to perform reconnaissance missions and retain the ability to launch airstrikes.

Derrick Van Orden noted that Biden has also failed to implement an effective strategy at the Southern border, saying 210,000 illegal immigrants came into the United States last month alone, a larger number than the population of Eau Claire.

Now he says the Taliban are beheading and hanging people and selling them into slavery. Van Orden believes that Biden did not follow the advice of the generals. He believes that the military leaders and cabinet members should have stepped up and pushed for a different outcome, resigning in protest if it didn’t occur to avoid the current debacle.

For the Afghan people, for the women and children there, “it’s a nightmare,” Derrick Van Orden said.