Parents Beware: The LGBTQIA+ Rainbow Cult Has Come for Your Kids

The author is a 16-year-old public high school student in SE Wisconsin. She wants to warn parents of how the LGBTQIA+ agenda is targeting youths.  Her name withheld for her protection.

Before I begin, I’d like to say that I’m not homophobic or whatever names the full-grown, basement-dwelling leftists like to hurl at 16-year-old girls in desperation of virtue signaling their ‘wokeness.’ However, I understand that those people need to release that bottled-up self-hatred and anger somehow, and, fortunately, I don’t let their mudslide of words oppress my First Amendment right like they wish it would.

In case you’ve been living under a rock, this past June has been pride month. Looking past all the pretty rainbows and sparkly confetti they like to campaign with, the LGBTQIA+ agenda (yes there are more letters than that- I like to call it the alphabet soup) is more complex and ridiculous than most adults know.

It’s recently occurred to me that while parents are out working their jobs and being successful, functioning members of society,  their kids are being exposed to drag queens, sex education, and gender dysmorphia by trusted entertainment providers like Nickelodeon. The education system has begun to make kids decide their gender/pronouns before they can read a book cover-to-cover, and social media is a breeding ground for sexual predators masqueraded with pretty rainbows.

So, you might ask, how is the LGBTQIA+ agenda targeting America’s youth? What has this agenda turned into? I’ll do my best to give a rundown. LGBTQIA+ stands for Lesbian, Gay, Bisexual, Transgender, Queer, Intersexual, and Asexual (or Alli). Some other sexual orientations include Autosexual (the attraction to oneself), Demisexual (only having sexual attraction if there is an emotional bond – because having morals is a sexual orientation now), Pansexual (sexual attraction is limited to no gender or orientation) and many, many more, of which I have linked here.

Now on with the identification sector. Gone are the days when there were only two possible ways you could address someone; he/him/his and she/her/hers. Now, being gender fluid and non-binary is a new norm. Gender fluid means that a person, at any one time, can change the gender that they want to identify as. It’s popular to wear colored bracelets and change them based on how one feels, pink if they’re feeling like a girl, blue for a boy, and green (or a variation of colors) for non-binary. Non-binary is when a person feels that they don’t belong to either gender, so they identify as they/them.

It doesn’t stop there, though, because there are living, breathing people out there who want to identify as numerous animals and inanimate objects using ‘neopronouns.’ They go about this by identifying as something like ‘kitten self.” All of this, while being absolutely ridiculous and almost comical, is also being normalized and encouraged by the left.

Beginning in early June, Nickelodeon broadcast a music video featuring drag queen Nina West, “The Meaning Of Pride.” The video spotlights Nina West dressed in a colorful costume dress, informing the viewer of what the pride flag colors meant, explaining the transgender flag, as well as broadcasting the POC flag (which has now been included onto the pride flag).

Another sing-along music video was featured in the kids’ show Blues Clues, a show I used to watch religiously as a child. The video features a cartoon of drag queen Nina West (once again) as he sings a parody to the children’s song “The Ants Go Marching.” The video starts out with cartoon animal families who have ‘two mommies” and “two daddies” who “love each other so proudly.” The video then progresses to broadcast non-binary dolphins, transgender beavers, bisexual sheep, asexual turtles, and a pansexual bird. Yes, let’s introduce these young, immature, bendable minds and allow them to decide incredibly permanent decisions about their bodies before they can cross a street by themselves.

Elle is just one example of many, many kids who thought they knew what they wanted, but it ended up deeply affecting their life negatively. Elle will now have to live with the bodily effects that testosterone supplements had on her young, underdeveloped body for the rest of her life. She was only 15 when first exposed to the idea of transitioning. The media are exposing kids 10 years younger than her to these ideas.

To any parents, like mine, who first underestimated the impact on the day-to-day lives this movement has on their children, download the TikTok app. Check your child’s school’s budget and what the money is spent on because my school found it necessary to install an “all-inclusive, family bathroom” instead of buying math textbooks. TikTok is an enormous platform for this movement with many, parts of the LGBTQIA+ represented on it.

Don’t get me wrong, most of the LGBTQIA+ creators are absolutely lovely people who create fabulous content, but with that comes a breeding ground for predators. James Charles, one of the most well-known and successful creators, has overwhelming evidence against him for allegedly grooming and even pressuring straight men into sexual activity, as well as allegedly defending men who groomed and sexualized underaged boys. Jessica Yaniv, a transgender woman, has been caught allegedly blatantly grooming young children online, young girls specifically.

Even in Catholic churches, sex abuse is prevalent. The church of England received more than 900 complaints of over 3,000 instances of child sex abuse with over 900 victims in the years between 1970 and 2015. One victim made an estimate that from the ages 11 to 15, a priest sexually assaulted him hundreds of times, with the boys’ compliance used as blackmail against his sister going into a convent. You can read more about this disgusting scandal, which was hidden from the public for years, here.

This year, Seattle Pride Parade held a $50 admission fee for white people to pay for ‘reparations,’ while all other races got in free. Racism against white people? That’s preposterous. Clearly charging (in an attempt to punish) people who never owned slaves and gifting money (that absolutely was not earned) to people who never were slaves makes lots of sense and will solve the civil war on the horizon (please note my sarcasm). Pride parades also banned gay police officers from celebrating their pride until at least June 2025, because as we all know, “all-inclusive” doesn’t mean including those who don’t fit the agenda. NYC Pride used this tactic as a way for law enforcement to “acknowledge their harm and to correct course moving forward.”

Alok Vaid-Menon is a thirty-year-old “trans and non-binary” activist, as well as the author of the whopping 64-page book, titled “Beyond The Gender Binary.”

Vaid-Menon identifies as ‘non-binary,’ meaning he wants to be addressed as “they/them.” However, he lost all respect after the sexualizing and victim-blaming of little girls.

The post below was posted on a poetry page run by Vaid-Menon called “Darkmatter”. This was posted years ago, when the debate of trans people being allowed into their transitioning genders’ public bathrooms was the biggest internet controversy but had been oppressed and hidden by Twitter, by banning accounts and removing posts involving Vaid-Menon’s post.

I’d also like to point out Vaid-Menon’s line that reads “But we also need to seriously overhaul the idea that there is a perfect victim anywhere,” as well as “the supposed purity of the ‘victims’ remained quite stagnant.”

Vaid-Menon used actual quotation marks when referring to the little girls who had been assaulted by evil, disgusting “transgender” men. So I’d like to try to understand this:

The left pushes the narrative that any minority who lives in the United States is automatically and systemically a victim despite living in the most privileged country in the world. However, innocent little children who were brutally and mercilessly assaulted by grown men are not victims.

But it doesn’t stop there. According to Vaid-Menon (who is clearly qualified to speak on behalf of little girls because he, of course, has been a “cute little girl”, despite being born a biological male), these innocent little girls were asking for it. “No one is a perfect pure flower that can be corrupted”, writes Vaid-Menon, the self-proclaimed feminist.  But don’t fear, for Big Tech partnered up with the LGBTQ community to sweep this pedophilic and predatorial incident under the rug. 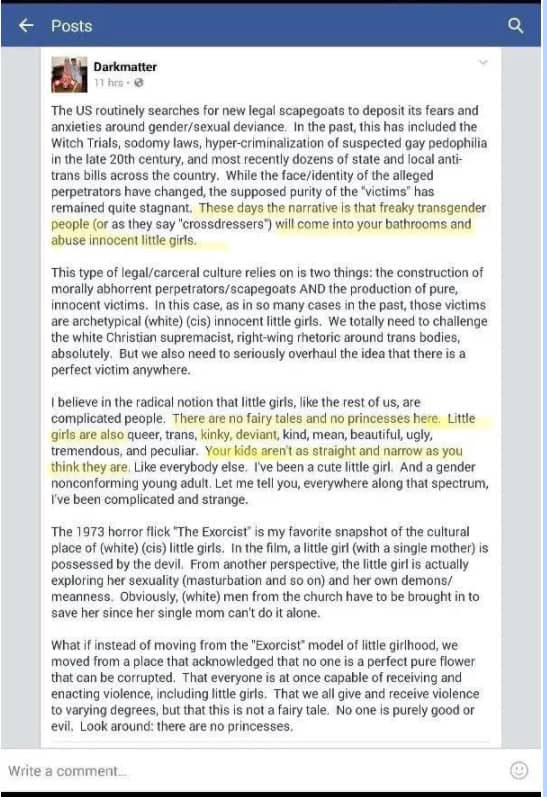 The purpose of this opinion piece wasn’t to attempt to bring down or give any LGBTQIA+ members a bad name, it was just to bring to light the realness and darkness that can be hidden behind the rainbows and ‘love’ that is abruptly shoved in our faces. The fact of the matter is that the left loves to feed and support the illusion of oppression to brainwash groups of people into getting under their wing.

The left is pushing their rainbows full of corruption and manipulation onto the general public, then ambushes those who question their agenda with homophobia, transphobia, cancel culture, and the threat of their entire career. The left is like Death Valley: a huge barren desert that desperately and unsparingly sucks up anything they can get with yet again nothing to show for it, while also posing a fatal threat to any living thing that hasn’t conformed to its agenda.