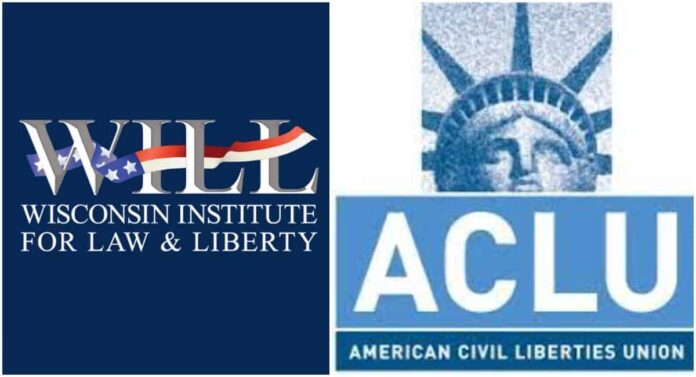 The Wisconsin Institute for Law and Liberty has sent a letter to Wisconsin School Boards, administrators and parents criticizing a letter by the American Civil Liberties Union that WILL believes falsely tells school districts that they are required to teach students about race and “related matters of cultural diversity.”

The warring letters emerged in the midst of growing debate and controversy throughout the state over the teaching of critical race theory or CRT. “While not all ‘CRT-based’ training necessarily creates a hostile environment, much of it does,” WILL wrote. “This is particularly so when a school advocates for, presents as ‘truth’ or requires students to affirm the concepts outlined above. Teaching children that they are complicit in ‘systems of oppression’ or have certain qualities or faults based on their color of their skin can create a hostile environment, as can pedagogical techniques that require students to act on or affirm these contentions. Lawsuits have begun. See, e.g., Deemar v. Board of Education of Evanston/Skokie, 1:21-cv-3466 (N.D. Ill. June 29, 2021). They will continue as long as such pedagogical practices continue to be used.”

The ACLU letter on critical race theory to school district administrators throughout Wisconsin states that efforts are underway in many Wisconsin school districts to ban the teaching of Critical Race Theory concepts and to limit the ways “that teachers can address issues of racial injustice with students.” The ACLU claimed that “the purpose of this letter, which is being provided to every school district in Wisconsin, is to remind school leaders that state and federal law make school districts responsible for teaching issues and concepts of race and diversity. Any district or school policy or practice must comply with these legal requirements.’

According to the ACLU, “to comply with state law, a district not only cannot prohibit teaching about racial issues, but rather must ensure that teachers provide appropriate instruction on human relations with particular regard to American Indians, Black Americans and Hispanics at all grade levels.” 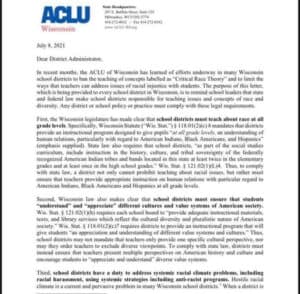 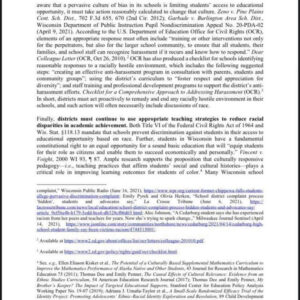 Here is WILL’s letter in full:

It has come to our attention that, in the guise of providing (unsolicited) advice, the Wisconsin chapter of the American Civil Liberties Union has sent a letter to district administrators purporting to tell them what the law “requires” that they teach about race and related matters of cultural diversity. If the point of the letter is to simply remind districts of the commonplace: that they should continue to teach American history in full, including things like the existence of slavery, the Civil War, Jim Crow, the civil rights movement and the substantial contributions of racial minorities to American culture and success, it is, if unnecessary, unobjectionable. Schools should do all of these things.

But it would be naïve to believe that the ACLU’s objectives are that modest. The “advice” is expressly offered in the context of criticisms of and efforts to restrict the use of concepts derived from Critical Race Theory and adjacent ideologies, clearly implying that state law must somehow “mandate” or limit the restriction of these concepts. It does not.

Let’s begin by defining “Critical Race Theory” and the instructional concepts derived from it. While a full explication of these concepts is not needed for our purposes, what characterizes these concepts is a focus on racial essentialism (the idea that persons are substantially defined by their race), an exaggerated standpoint epistemology (the idea that one’s perspective is substantially formed by his or her race), an emphasis on something called white privilege (the idea that all white persons benefit from a generally undefined “systemic racism”) and the assumption of black oppression (the contention that all black persons are substantially burdened by this systemic racism). They often include concepts of collective guilt or responsibility on the one hand and collective victimhood and entitlement on the other. They are generally combined with a series of contested claims about American history.

These concepts sometimes include the identification of “white” and “black” values and culture, suggesting, for example, that things like “objective, rational, linear thinking,” “quantitative emphasis,” and “hard work before play” are ‘white.” They are sometimes taught by pedagogical devices that segregate children by race and compel them to repeat or assent to a variety of contested propositions about race and a child’s “role” in “systems” of “racism” and “oppression.” They are often not limited to the provision of information or explanation of a perspective, but include a call for action. These devices may include, for example, requiring a white student to “acknowledge” or “affirm” his or her “privilege.”

Proposals to limit curriculum or teaching derived from Critical Race Theory or similar ideologies differ and are of varying merit, but most proposals (as well as most public criticism of these concepts) seek to prohibit schools from advocating for or requiring students to assent to any of the following propositions:

Whether or not one agrees with them, “Critical Race Theory” and related concepts at issue here, as a legal matter, are not equivalent to or even necessary for an “understanding of human relations, particularly with regard to American Indians, Black Americans and Hispanics.” (Wis. Stat. § 118.01(2)(c)(8)) It is not equivalent to or necessary for “teaching about ‘racial issues.’” Nor is it equivalent to or necessary for “reflecting the cultural or pluralistic nature of American society.” (Wis. Stat. § 121.02(1)(h)) To the contrary, these concepts are a particular political and ideological view of these matters. Nothing in state law compels that they be taught and there is no evidence that they enhance student performance. (Indeed, to the extent that they mischaracterize certain values and attributes as “white,” they harm student performance.) To the extent that the ACLU letter implies otherwise, it is bad and unsupported legal “advice.” One final matter. The ACLU letter observes that school districts are prohibited from creating a racially hostile climate. That’s true. But, to the extent that the letter implies that teaching these concepts derived from Critical Race Theory or similar ideologies is necessary to avoid such an environment or that restricting them creates one, the ACLU letter is not only wrong, it is dangerously wrong. It is dangerously wrong because it gets the matter exactly backward. While not all “CRT-based” training necessarily creates a hostile environment, much of it does. This is particularly so when a school advocates for, presents as “truth” or requires students to affirm the concepts outlined above. Teaching children that they are complicit in “systems of oppression” or have certain qualities or faults based on their color of their skin can create a hostile environment, as can pedagogical techniques that require students to act on or affirm these contentions. Lawsuits have begun. See, e.g., Deemar v. Board of Education of Evanston/Skokie, 1:21-cv-3466 (N.D. Ill. June 29, 2021). They will continue as long as such pedagogical practices continue to be used.

School districts should teach all of American history and they can certainly teach about race. But they need not teach a highly politicized and contested view of that history and of race. And they may not create a hostile environment based on race – even in the guise of a misguided (and misnamed) “anti-racism.”