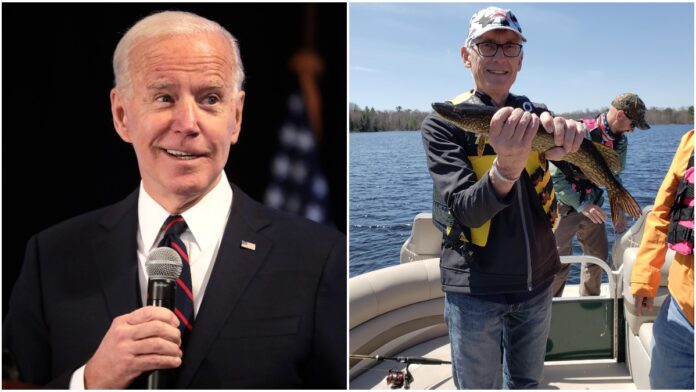 Four months after taking office, supposedly as a moderate who would seek bipartisan consensus, Joe Biden is done pretending he isn’t just the grandfatherly figurehead of an administration that any aspiring socialist could be proud of.

Tax hikes, job-killing regulations, and a commitment to the woke culture wars: the Biden administration is checking every box on the modern Democrats’ wish list. Alexandria Ocasio-Cortez and “The Squad” think Biden is “exceeding” progressive expectations. Just as the overlords at the CDC finally decided you don’t need to wear a mask on your face anymore, Democrats decided they no longer need to mask their socialist ambitions. They embrace it, and so does their president.

In Wisconsin, we’ve seen this story before. Two years ago, another creaky, career liberal took over and went about undoing the success of his predecessor. Tony Evers was elected largely because he was inoffensive and was lucky enough to run in a good year for Democrats. Just like Biden, he started undoing anything his predecessor had done right, mostly because liberals hated the guy before him.

As it turns out, running a state or the country takes more than some aw-shucks. You need to actually lead, and Joe Biden and Tony Evers have failed badly, despite what you might see in the media.

In fact, the two mediocrities reborn as “government can do it” liberals have shown a complete inability to wield government to solve actual problems.

A surge of migrants at the border worse than any we’ve seen before? Not a crisis, nothing to see here.

More than 100,000 out-of-work Wisconsinites calling for help because Governor Evers shut down the economy and killed their jobs? The Evers administration couldn’t even pick up the phone. Less than one percent of calls to the state’s unemployment assistance were answered. Thousands were left with no job and no help because of Governor Evers’ incompetence.

The governor couldn’t even bother checking in with his workforce development secretary to straighten things out. I guess the call wouldn’t have been picked up anyway.

No, as more and more states recognize the harm of paying people to stay home while the economy opens back up — even as many employers can’t get people to respond to “help wanted” signs — Evers refuses to budge.

Add to all that the massive tax increases Governor Evers would enact on Wisconsin’s farm families, manufacturers and small businesses, and it’s quite a devastating track record. Job creators are taking note – Wisconsin recently fell seven spots in the latest ranking of best states to do business in. Only three states fared worse.

Even as job growth stalls and business leaders in Wisconsin and across the country point to pandemic-related bonus unemployment benefits as the cause, President Biden puts his head in the sand. Governor Evers refuses to follow the lead of other governors and ignores pleas from around the state to get Wisconsin back to work by ending the state’s participation in the program.

It’s long past the point of surprise that Democrats are out of touch with the economy, but a new wrinkle is their open hostility toward law enforcement. President Biden highlighted “distrust” of police in a statement supposedly honoring the annual Police Week. Still, that’s better than Governor Evers, who for the second year in a row didn’t issue an official proclamation to mark the occasion. Apparently supporting law enforcement doesn’t rise to the level of proclamation-worthy causes like Local Quilt Shop Day, Supermarket Employee Day, or Court Reporting and Captioning Week in the eyes of Tony Evers.

We have another three years before voters have the chance to hold President Biden accountable at the ballot box. But Governor Evers’ failed leadership and far-left agenda are on the ballot next year. Reclaim Wisconsin, send Evers to the exits, and Biden won’t be far behind.