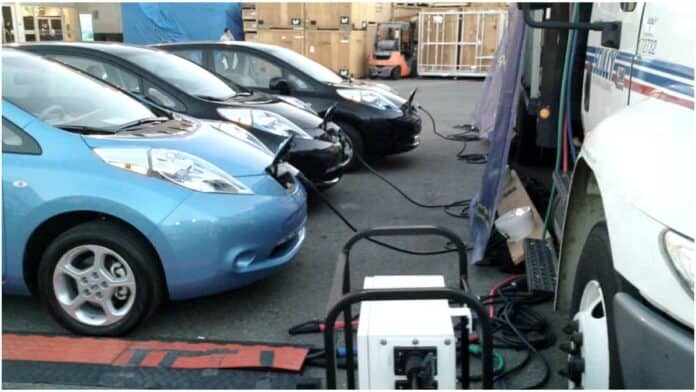 Senators Diane Feinstein and Alex Padilla sent a letter to Biden urging him to “follow California’s lead and set a date by which all new cars and passenger trucks sold be zero-emission vehicles.”

California’s two U.S. Senators, both Democrats, are calling on President Joe Biden to ban the sale of gas-powered cars in the United States.

Senators Diane Feinstein and Alex Padilla sent a letter to Biden urging him to “follow California’s lead and set a date by which all new cars and passenger trucks sold be zero-emission vehicles.”

“We urge your administration to take advantage of this effort and make real progress in coordination with states, like California, that share your goals to aggressively fight climate change by eliminating harmful pollution from the transportation sector,” the senators wrote.

Last September, California Gov. Gavin Newsom, who now faces a potential recall election, signed an executive order banning the sale of gasoline-powered cars in California by requiring all new cars and trucks being sold in the state to be zero-emission vehicles by 2035. Currently, electric vehicles account for less than 3 percent of all vehicle sales in the U.S.

Feinstein and Padilla asked the Biden administration to require the auto industry to commit to shifting to primarily producing electric vehicles, something some in the industry, like General Motors, has said it “aspires” to do by 2035. Ford has announced its intention to shift its car models in Europe to be solely electric by 2030.

On Jan. 27, Biden signed an executive order committing the federal government to purchase zero-emission vehicles for the US Postal Service, which is in the process of developing the next generation of delivery vehicles.

The Environmental Protection Agency said tougher emissions rules “will play an important role in confronting climate change and advancing economic and employment opportunities,” and that it was “working with the Department of Transportation, California and other states, the automobile industry, labor, and other stakeholders to consider a range of views on how to set ambitious standards.”

The California senators said “at an absolute minimum” new federal emissions rules should follow California’s lead and agreement with automakers.

In California, one electric auto assembly plant exists, a former GM-Toyota plant in Fremont, California, near San Francisco, which is now being used by Tesla, the world’s leading maker of electric cars.

According to the International Energy Agency, there could be 125 million electric cars in use worldwide by 2030, maybe double that if governments require it.

However, electric cars are worse for the environment per mile than comparable gasoline-powered cars, according to a report published by the National Bureau of Economic Research. Among its findings, the researchers concluded, “over ninety percent of local environmental externalities from driving an electric vehicle in one state are exported to others, implying that electric vehicles may be subsidized locally, even though they may lead to negative environmental benefits overall.”

Control of The House Still Up in Air, Republicans Edge Closer to Majority