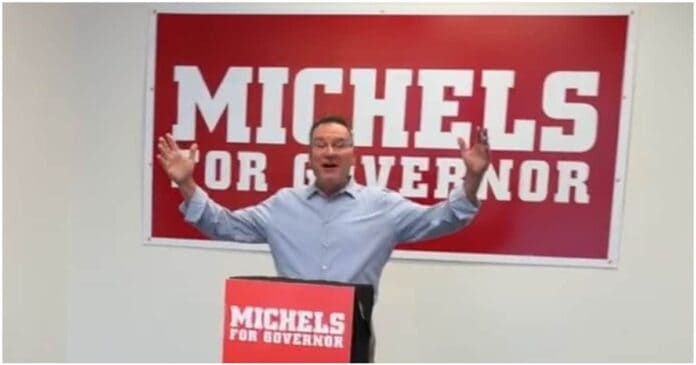 Historically, if Republicans could get 40% of Milwaukee County votes, they were well-positioned to win statewide. By locating his HQ in Milwaukee County, Michels and his campaign indicated they are going to fight for every Wisconsin vote.

“We are going to start a new era of new leadership in Wisconsin,” Michels said in his speech at the West Allis office. He stressed that his family’s company, Michels Corp., was set to help build the Keystone pipeline until President Joe Biden shut it down.

“When he (Joe Biden) was dancing that night at his inaugural ball, we were laying off about 700 hard-working men and women,” he said. “These are great family-supporting jobs. What a travesty.” He tied the Biden’s decision to rising gas prices.

Michels noted that his family’s company bid on the border wall. “We wanted to build that. We need to have firm control on illegal immigration and get it stopped,” said Michels.

Michels also talked about election integrity. “If we don’t have fair elections, the entire system comes apart….you can’t have ballot boxes sitting in the middle of a park unattended. That’s absolutely insane…”

As governor, he said he would work with the Legislature to “stop the Zucker bucks and stop the ballot harvesting and to have fair control of early voting, and we will pass those laws, and we will have no more election shenanigans here in Wisconsin.”

Michels said he supports universal school choice and wants to see “more ABCs and to stop the CRT in education.”

Michels also spoke about crime spikes. He condemned the defund-the-police and “cops are bad” movement and said his brother-in-law is a police officer. “I will support law enforcement. I will back the blue. Every law enforcement officer here in Wisconsin will know that at the top” they will have a leader who backs them and will work to reduce crime, Michels said.

He said the campaign office in Milwaukee County was the first of five they are going to open up soon. Michels said he was “cooking with jet fuel, and we are off,” using an Army reference.

Michels’ campaign considers issues like crime and gas prices a bridge back to suburban women the party wants to attract. Homicides in the City of Milwaukee are on track to break last year’s record numbers.

In contrast, Evers recently vetoed a slate of educational freedom measures, and he’s let down law enforcement in myriad ways, including during the Kenosha riots when he slow-walked getting the National Guard to that city.

Wisconsin Right Now was the only media outlet in attendance at the opening.

You can watch Michels’ full speech and see the behind-the-scenes video here:

Michels said in an interview with Wisconsin Right Now that he wants to be governor for all of the people of Wisconsin “from Kenosha to Superior,” but he said that Milwaukee is a “very important city” to the state’s economy and vitality.

The city “has so many problems. But they are fixable,” he said.

State taxpayers fund the cost of Milwaukee failures, footing the bill for some of them, he said.

“It’s getting worse,” Michels said, noting that he had just met with a man who indicated he had to “run from his office to his car to make 100% sure he wouldn’t get mugged.” He said no one should have to look over their shoulders. “We have to do better. We have to flip the switch” and combat crime.

In his speech, Michels described his childhood baling hay and picking rocks and then getting involved in ROTC and spending 12 years in the Army. He was a commander of the Tomb of the Unknown Soldier. He then joined the family business. He called his father a “great entrepreneur, a great American businessman.” He said he and his brothers have built the company from a few hundred employees to over 8,000. “There’s nothing fancy about that,” he said of those anecdotes.

He said the government often puts excessive regulation, taxation and bureaucracy on businesses in the state.”

Michels discussed his meeting with Trump. He said they talked about “building stuff” and characterized the former president as very insightful.

“I hope to win his support,” he said of Trump.