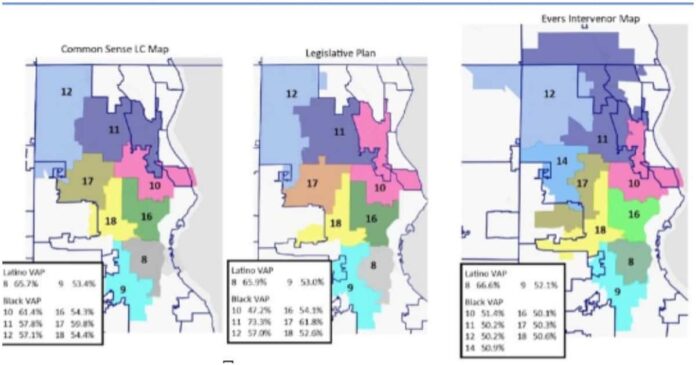 Evers/Court map actually reduces the number of highly competitive districts — the exact opposite of what anti-gerrymandering reformers have been demanding for 10+ years.

As has been well established, even under the Evers map the GOP is strongly favored to retain control of the Legislature. While Democrats have blamed “gerrymandering” for their failure to win legislative seats, the truth is that Democrats are so highly concentrated in Madison and Milwaukee that 50% of the statewide vote does not translate to winning 50% of the districts. In addition, Democrats continue to lose nearly all of the highly competitive districts. Candidates matter and Madison socialism does not sell well in rural Wisconsin.

Here is an overview of the partisan balance using a multi-race gubernatorial year composite:

Note that the Evers/Court map actually reduces the number of highly competitive districts — the exact opposite of what anti-gerrymandering reformers have been demanding for 10+ years. The court moved seats that were highly competitive and made them DEM seats.

The bigger Democratic opportunities may be seen in the Senate. The GOP under the old map needed to win 2 of 7 highly competitive seats. Now they need to win 2 of 5. The most notable change is in Senate District 5 (Kooyenga). Under the old map Walker carried that district by 5.9%. Under the new court map, Walker loses it by 6.4%. This district is up for election this year.

Biggest flaw in SCOWIS Decision:
The court relied exclusively on the overall core retention to determine which map was the best “least change” map. But in the Milwaukee districts, where core retention is most important to protect the Voting Rights Act (VRA) districts, they disregarded least change in pursuit of a 7th Black assembly district. The result is not only a likely violation of the VRA, but a clear violation of the Equal Protection Clause of the 14th Amendment.

The 6 Black districts (10-12 and 16-18) and the 2 Latino districts (8-9) were drawn or approved by the federal courts to comply with the VRA. Therefore, in no locale is it more important to try to enact least change (not just geographically, but demographically). The Evers map is clearly not a least change map for Milwaukee County. NOTE: The Common Sense LC (least change) map was drawn without partisan regard to be a benchmark of what a true least change map should look like.

Here is another example from Milwaukee County where “least change” was ditched by the Court. This was clearly an attempt to achieve a partisan goal of harming a GOP member of the assembly. This is also an example of how the Court just ignored the law requiring minimal municipal splits.

The federal courts over the past 30 years in Wisconsin sought to comply with the VRA through creation of districts that have at least 55% voting-age Black population. While there is not magic number of what constitutes VRA compliance, Senator Lena Taylor and others have argued that districts below 55% likely violate the VRA. The Wisconsin Court has dropped all Black districts below 55%.

The Equal Protection Clause of the 14th Amendment prohibits racial gerrymandering — the use of race as the predominant factor used in drawing of districts. While drawing districts that meet the VRA, drawers must not permit race to be the predominant consideration at the expense of other criteria. The only way to get 7 districts to all be nearly identical (as Evers did) at ~50% Black is to focus solely on race and the racial makeup of each and every ward and to set aside core retention. Justice Roggensack in her dissent made this same point stating, “a majority of this court engages in racial gerrymandering contrary to the Equal Protection Clause of the Fourteenth Amendment of the [U.S.] Constitution which prohibits separating voters into different voting districts based on the race of the voter”

To appeal to the US Supreme Court there must be a federal issue. Both the VRA and the 14th Amendment are federal issues, but the chances of a successful appeal remain a long shot. First, the SCOTUS tends to defer to states on redistricting and this decision was made by a state court. Second, the GOP is not in a great position to appeal because their map too drew a district that was below 55% Black voting age population (in fact, it was below 50%). A successful appeal likely needs to come from a minority interest harmed by the likely VRA or 14th Amendment Violations.

Note: The Legislature and Wisconsin Institute for Law & Liberty have now asked the Supreme Court to block the Evers’ maps.