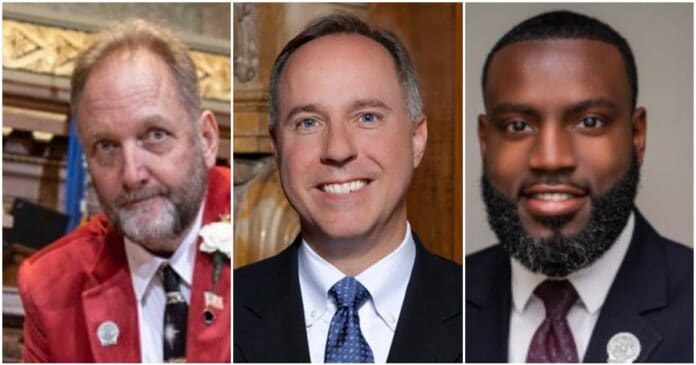 Speaker Robin Vos took swift disciplinary action against Republican state Rep. Timothy Ramthun for spreading what he calls “misinformation” about him relating to the election, however, Vos and the Assembly still haven’t taken any action against Democratic state Rep. David Bowen for his behavior at the scene where a violent mob assaulted two police officers at their own home and a gun was discharged near them.

Although Bowen wasn’t accused of the physical assaults, he was present and refused to give police a statement about what happened, hindering the police investigation into serious felonies. Even Vos himself called Bowen’s actions “abhorrent.” But he did absolutely nothing.

That wasn’t the case with Ramthun, whose offense involved making allegations against Robin Vos that Vos says aren’t true and embarrassed him on a national conservative website, Gateway Pundit; Bowen’s own cohorts said Bowen lied to the public about the violent mob attack and made disturbing comments.

The Assembly Speaker stripped Ramthun of his only staffer as punishment. Meanwhile, Bowen’s website lists two staffers; that’s now two more than Ramthun, who was left without a single staffer to answer constituent phone calls and concerns. We think that penalizes Ramthun’s district because he will have less help than other legislators to conduct outreach – including Bowen!

More than a year after the violent mob attack against the officers, the Assembly still has taken no action against Bowen.

“I think Rep. Bowen’s actions were abhorrent, and we will be discussing options for the Assembly to address his actions,” Assembly Speaker Robin Vos told Wisconsin Right Now on Jan. 23, 2021, in an exclusive interview.

He’s never explained the Assembly’s lack of action toward Bowen. Yet Vos acted swiftly against Republican Ramthun, who is a major critic of the 2020 presidential election, for making allegations….against Vos. Republican Assembly leadership then swiftly put out a lengthy statement defending Vos’s action against Ramthun and accusing Ramthun of lying. We don’t remember a similar statement about Bowen.

In contrast, we wrote every single member of the Assembly in the past, asking what action they planned to take against Bowen, and had trouble getting most to even respond.

Apparently, Assembly Speaker Robin Vos believes that accusations made by a fellow representative against him are more serious than Rep. David Bowen being present at the scene of a violent mob attack against then Wauwatosa Police Officer Joseph Mensah and his Milwaukee police officer girlfriend.

We bet Officer Mensah and his police officer girlfriend would disagree. They were left bruised in the attack. Although Bowen is not accused of laying a hand on them, his cooperation with police could have helped them pinpoint who did. He wouldn’t give it.

Even after top leaders in the Wisconsin State Assembly said they would discuss Wauwatosa Police Chief Barry Weber’s request that they seek discipline against Bowen while in caucus, nothing happened.

Were Robin Vos and the legislators too caught up in the current WOKE movement to bring themselves to discipline an African-American legislator?

Yep, we just asked that.

We reached out to Robin Vos for comment, but he failed to respond.

Here’s a reminder of what David Bowen is accused of doing:

Three People’s Revolution members were criminally charged, one with discharging a firearm near the officers, who were left with injuries after being beaten by multiple people. Their home was also vandalized. The People’s Revolution was furious at Mensah over his three on-duty fatal shootings. However, District Attorney John Chisholm ruled all three were legally justified acts of self-defense.